Lucky Daugavpils for the 3rd time 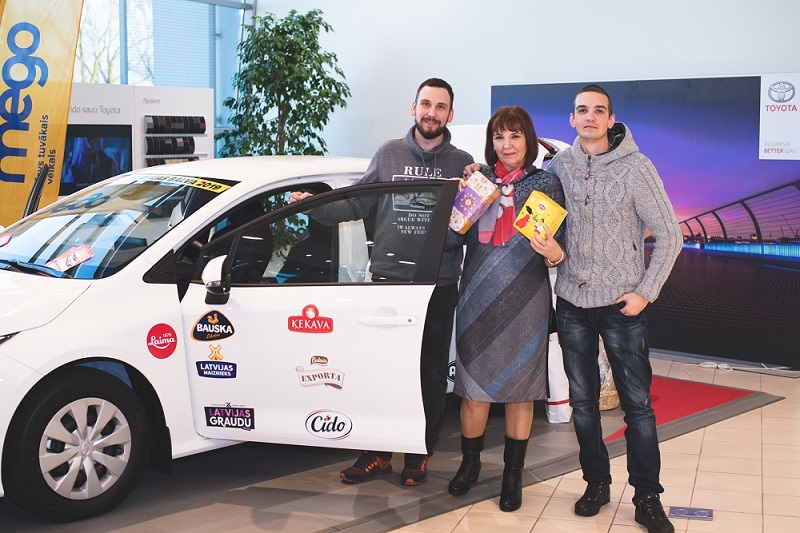 “Mego” and “Vesko” Lottery car for the ninth time, and for the third time the car leaves for Daugavpils.

In the spirit of the Christmas mood, “Mego” and “Vesko” congratulated the winners of the “Big Lottery 2019”. The main prize - the Toyota Corolla car was awarded to Inara Laitana from Daugavpils on December 9 at the Amserv Motors automobile center on Krasta street 3 in Riga.

On Monday at the Amserv Motors car center, deja vu was felt. A year ago the main prize from "Mego" and "Vesko" Toyota C-HR was awarded to Daugavpilchanka Marita, and this year Inara Laitane from Daugavpils took the baton of luck, becoming the owner of Toyota Corolla on December 9th.

Inara learned that it was her luck who smiled at her, choosing her check from more than 40,000 registered, while in the hospital. “At that moment I was thinking more about my health - I was connected to the system, so at first I didn’t realize what happened,” says Inara, an operator in a French company from Daugavpils.

The fact that the news of the victory is not a joke, she began to understand when the representatives of “Mego” and “Vesko” asked to find a lucky check. “Then I really believed that all this is real. Of course, I was in a pleasant shock, ”Inara recalls the events of the November days.

The rules of the lottery require that two lottery products be bought at the same time in the “Mego” or “Vesko” store. The happy products for Inara are Lipton tea. “Delicious and happy tea,” said Ms. Laitane, the new owner of Toyota Corolla, because Inara won the first such impressive prize for the first time. She said that she is constantly participating in the lottery and that she was once lucky to win a gift card for buying fuel in the Mego and Vesko lottery. “At that time there was no car in which you could pour fuel,” Inara laughs.

Upon learning that she was already the third lucky person from Daugavpils, Inara said that it was imperative to continue participating in the Mego and Vesko lotteries, since Daugavpils residents were so lucky.

The winner went home by herself at the wheel of a new car. “I have a driver’s license, there wasn’t only a car!” Thanks to the “Mego” and “Vesko” lottery, Christmas came to the Laitana family on December 9th!

Indra Granateka, a member of the board of Baltstor, the largest association of Latvian retailers, passing keys to Inara, shared her memories: “Daugavpilcians are very loyal customers. We can observe this by the number of checks sent (10%) - and this percentage continues to grow, therefore, naturally, the main prize is sent to Latgale again. This is the ninth “Mego” and “Vesko” lottery with the main prize - a powerful vehicle. This has already become a tradition that our customers are looking forward to, and we cannot retreat - the lottery must be mandatory, and the main prize should be a car! And these stories of victories are so different, touching and exciting, that I want to continue! "

he first winner was congratulated by Alexander Afanasyev, marketing director at Mego and Vesko. He welcomed the right choice of store and products: “Lipton Tea and“ Mego ”and“ Vesko ”even have a logo color - common - sunny and cheerful, just the one that will cheer everyone up this winter! "

Partners of the Mego and Vesko lottery followed his example, filling the trunk of the new Inara car with presents. A Ķekava representative presented a basket of products, asking them not to forget to include Ķekava products in a lucky check. Ādažu Čipsi wished that there was always a place for snacks in the kitchen of the lottery winner, and Vegeta wished to always taste food and taste life. And how without Forevers traditional greeting - a rich basket with meat products and a wish: “There is everything here to be charged with energy and strength!”

This year, the "Big Lottery" was held from September 2 to November 24. Any person who made purchases at “Mego” and “Vesko” and filled out an online application form, indicating the name, surname, check number, the store in which he made the purchase, and his email address, could take part in it. Checks could be presented in unlimited quantities. One of the participants approached this very seriously and registered checks 372 times. There are practically no obstacles to participate in the lottery - this time the oldest participant was a gentleman who was 100 years old.

ONE KITCHEN, COUNTLESS POSSIBILITIES!Stay At home with Bolt Food