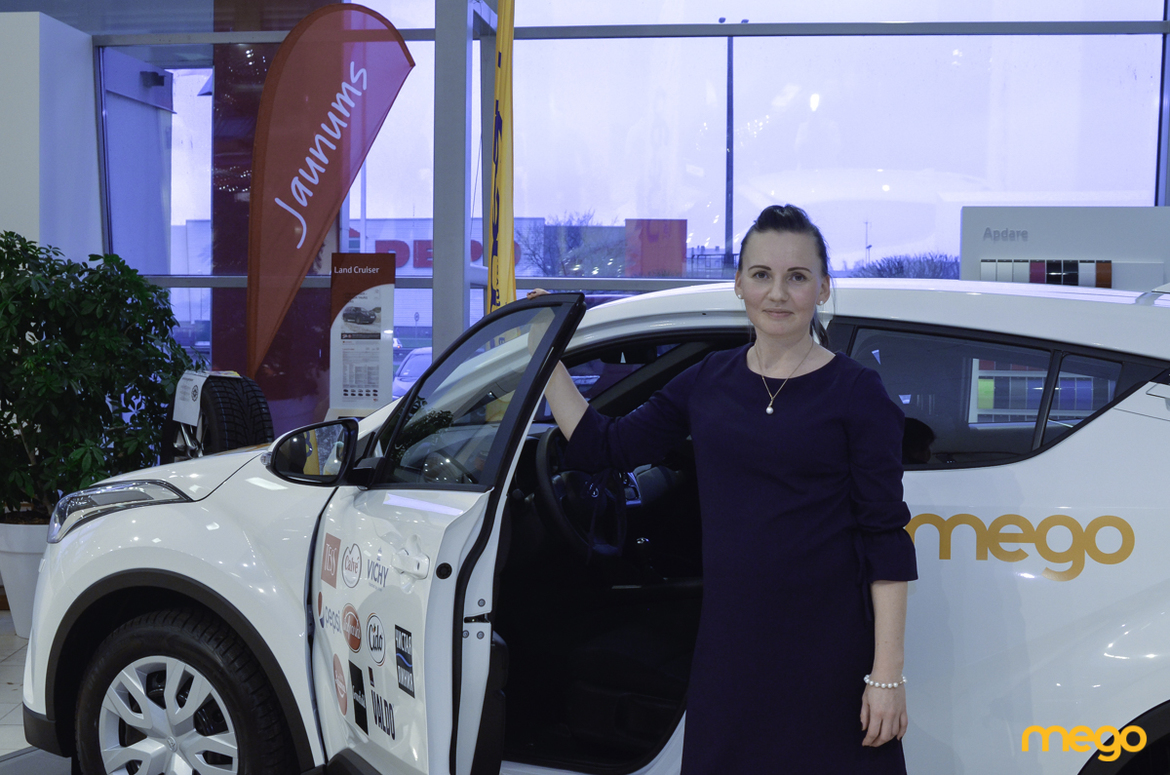 We are still waiting for Christmas, and Mego and Vesko have already presented the winners of the Big Lottery 2018 with prizes. The main prize - a Toyota C-HR car - on December 12 in the car center "Amserv Motors" in Riga at Krasta street, 3, was received by a resident of Daugavpils Marita Bleidel.

On Wednesday, the atmosphere of Christmas literally hovered in the air at the Amserv Motors automobile center, as it was the day when the lottery winner, Marita Bleydere, received its big prize - a Toyota C-HR car.

It is said that shared happiness is a double joy, and this could be observed during the ceremony - along with Marita, both Mego and Vesko employees and partners who represented brands participating in the lottery, as well as Amserv Motors representatives were happy ". Indra Granateka, board member of the largest association of Latvian retailers "Baltstor" - the organizer of the lottery "Mego" and "Vesko" with the car as the main prize, admitted: "On this day, when I have to hand the keys to the car to the lottery winner, I am also excited like her. The emotions that I feel when communicating with the lucky one give an incredible positive charge. "

Of the more than 45,000 checks that were registered, success was smiled at Marita, who said that she had taken part in the "Mego" and "Vesko" lottery for the first time and registered three checks, but it was the purchase of Italpasta products and Vegeta spices that turned out to be happy. “Now you need to go to Italy!”, Says the lucky woman. She said that when they called her and told her about the prize, she cleaned the house. "After this news, my hands and feet were shaking all day. The phone was breaking off from congratulations. I was also congratulated by the winner of the previous summer lottery Mego" un "Vesko" Rita. We are good acquaintances. ”Currently, Marita is on maternity leave and believes that the car is a gift to the future baby.“ At first, the life mate did not believe my luck, but later we laughed that I felt my victory in advance because the day before the announcement results we were in the theater and in the restaurant. So to say, celebrated in advance, "jokes Marita.

"Now that I have a car, I just need to learn how to drive it," adds a young woman who got up at three o'clock in the morning on the day she received the prize, so that she could get to Riga by bus with her life partner. Home they returned to the new Toyota C-HR.

Wishing to get a driver's license as soon as possible, Indra Granateka, member of the board of Baltstor, also recommended participating in the following lotteries: "Before saying:" I have no luck in lotteries! ", you need to check yourself by taking part in them. In my experience, once the car was won even by a check for 57 cents. Success can come to those who do something. Everything is possible!"

It was the seventh lottery in which any buyer of the shops "Mego" and "Vesko" could win a car. On the question of how it turns out that the second time in this lottery, luck smiles at a resident of Daugavpils, Alexander Afanasyev, director of marketing for the chain of stores "Mego" and "Vesko", replies that it is luck that cannot be affected. "Probably, the car won by a resident of Daugavpils in the summer pushed local residents to more active participation," said Alexander. Yes, Daugavpils is on the second place for check registration (on the 1st place are residents of Riga, on the 3rd place are residents of Ventspils).

Director of the company "Podravka" in the Baltic States congratulated the winner and joked that the choice of products "Vegeta" leads to success, and how else to explain that this is the third car won when buying products "Vegeta". He presented the winner with a gift basket so that Marita's family could try the new line "Vegeta Natur", which is even more useful. The representative of "Konig Distribution" also congratulated the winner on the production of "Italpasta". When gifts were received, the winner joked that "these two products will have to be put on a gold shelf."

But that was not all. The salon and trunk of the new car continued to be filled with gifts. Especially cordially Marita welcomed "Latvijas Maiznieks". "We are from Daugavpils, and the fact that the winner from our district makes us feel especially as if we ourselves had won." In turn, the representative of "ždažu Čipsi", presented Marita with a gift basket, in which there were also gourmet chips, as well as chips from pink potatoes. She added that now all friends will come to visit Marita to congratulate her, so chips will be very useful as a snack.

After seeing a Kekava representative with a gift basket, Marita admitted that Kekava products are very popular in their family. Marita was also presented with products from Clean Line.

For the first time SIA "Voldemārs", whose products are present in almost every kitchen, participated in the lottery with its products. The company's commercial director was pleased with the successful cooperation and wished the winner success not only in lotteries, but also in other areas

Berlinger Haus – The Choice of Professionals!24/7 shops
Cookies provide us with an opportunity to improve your features as a user. By continuing to use our site, you agree with the use of cookies.
Read moreOK