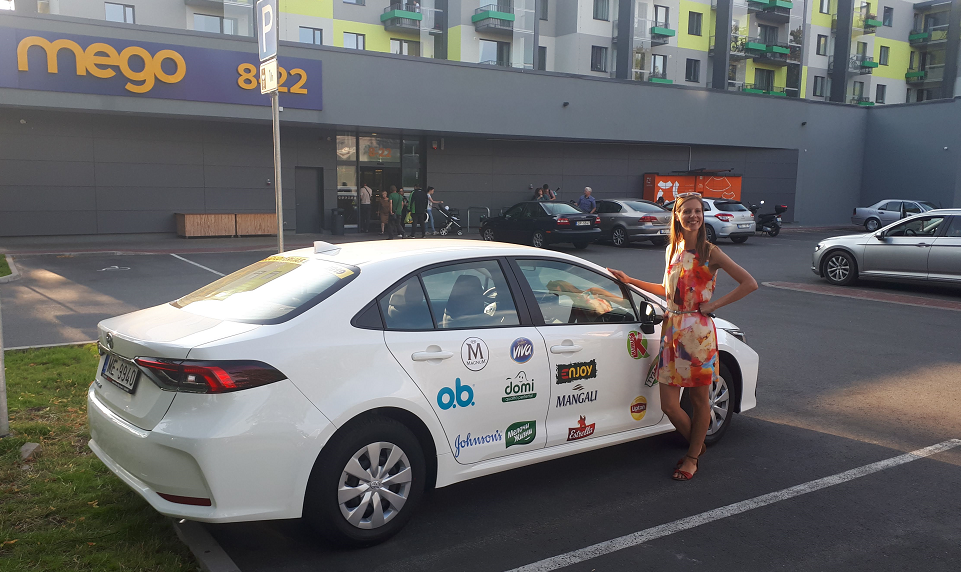 For the eighth time, one of the participants of the Big Lottery Mego” and “Vesko" went home with the main prize. On July 25th, at the Amserv Motors car center on Krasta Street 3 in Riga, Ieva Zemite, from Riga, received the keys to the 2019 Toyota Corolla.

An old saying says that chickens are counted for the fall, but the “Spring Lottery 2019” Mego and Vesko, in order to please one of their customers, does so in the middle of summer. This time, luck smiled Ieva Zemite from Riga, who received the keys to the 2019 Toyota Corolla and countless greetings and gifts from partners Mego and Vesko, whose branded products give the opportunity to participate in the lottery.

Indra Granateka, member of the board of the largest retail association in Latvia Baltstor, greeted Ieva, recalling Mego and Vesko’s slogan “Everyone can win!” And encouraged Ieva to participate in the following lotteries: “This is the eighth time Mego and Vesko are given the opportunity to win the vehicle. Turning the number eight in another plane, we get the sign of infinity. And we are determined to continue this beautiful tradition ad infinitum. ”

This time teacher Ieva was lucky enough to take part in lotteries, but never won anything. Participation in the lottery, organized by Mego and Vesko, was completely random. “Mego and Vesko shops are usually not on my way, so I rarely shop there. That evening, when the fateful purchase was made, I went shopping with my friend Juris, who lives next to Mego, ”recalls Ieva. Perhaps it would have been an ordinary purchase, but at the checkout, Ieva thought that she wanted to buy her favorite Super Ice Cream Caramel Ice Cream, which later turned out to be a fateful lottery product.

Ieva registered one check and told a friend that she would win, if only because he did not believe in luck in the lotteries. In fact, Ieva herself did not believe that this could happen, and when she received a message from the lottery organizers, she had completely forgotten about her participation. "I thought I won a gift card, and I went to the site to clarify this, and at the same time I wondered if I kept the check." Seeing that she won the grand prize, she called her friend. Joy and surprise alternated with excitement as to whether a happy check was thrown away. But the worry was superfluous, the check remained.

In her spare time, the happy owner of a new car is dancing in the Riga Dance Club, and on weekends traveling around Latvia. “I like to visit the cities of Latvia, as well as travel to the countryside. I think Latvia is the most beautiful country, ”says Ieva. Now she will be able to travel to Toyota Corolla 2019. “We will have to go outside Latvia. In Munamyagi, ”Ieva is full of determination.

Prize Ievey was handed by the board member of Baltstor Indra Granateka, with wishes of pleasant travels, while not forgetting to visit the shops of Mego and Vesko.

It was the eighth lottery in which those who shopped at Mego and Vesko got a chance to win a car. In the last two lotteries, the car went to Daugavpils, this time luck smiled to Riga lady. Having received the car keys, Ieva filled the entire trunk with gifts from partners Mego and Vesko. Ieva received especially warm congratulations from Krista Vitena, Super Viva ice cream brand manager: “We are glad that our ice cream helped us to get the main prize. And we want to express our gratitude for the trust in our brand and give you the opportunity to enjoy ice cream on a picnic or on a trip on your new car. ”

The Daugavpils-based company Latvijas Maiznieks, whose city has already won the cars won twice, prepared a gift basket with products for both everyday and festive table and expressed the wish that the next lottery check would also have a place for Latvijas Maiznieks products . Vegeta also provided an impressive basket of various spices. It should be noted that the previous lottery winner won thanks to the purchase of Vegeta spices. A Vegeta spokeswoman encouraged the winner to continue participating in the Mego and Vesko lotteries.

This year, the 2019 Spring Lottery was held from April 15 to July 7. Anyone could take part in it. To do this, you had to buy two lottery products in the Mego or Vesko shop and fill out an online application form, indicating the name, check number, the store where the purchase was made, and e-mail address. Checks could be sent in unlimited quantities, and Mego and Vesko’s clients did not hesitate

24/7 shopsStay At home with Bolt Food
Cookies provide us with an opportunity to improve your features as a user. By continuing to use our site, you agree with the use of cookies.
Read moreOK